The Business of Architecture

In early 2020, the owners of Rossmann Architecture Inc. (RAI) realized that hiring an experienced executive would be crucial to furthering the growth of the company. They needed a seasoned professional who could help build the framework in which to scale the company while maintaining a strong internal culture, a rainmaker with an existing network and the ability to make connections with new potential clients. This position could only be filled by a rare unicorn, and they realized their best chance of finding one was to seek the help of an external executive recruiter.

Shane Balcom was presented to RAI early in the recruitment process and, despite initially seeming out of place for the position, it quickly became clear to everyone that he was an ideal candidate. Although he had no experience in architecture and had previously worked with larger companies, his vivacious personality and extensive business knowledge made him the perfect choice.

In mid 2020, Shane joined the RAI team as Managing Director and has since grown the firm to more than double its employees and triple its revenue. 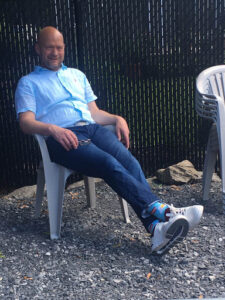 How he has managed this, especially in the midst of a global pandemic, continues to be a question many have been asking.

While handling many recruiting opportunities, Shane has created development structures to grow the revenue and organization of the company. Having a Managing Director to tackle these business roadblocks has allowed the CEO and VP to maintain and expand their vision for the company in terms of culture and business growth.

With experience in business management, Shane brings a sense of structure to RAI which is implemented through regular rhythms with both the employees and executives. His role was built to coach everybody in all aspects of the business, including forecasting, people management, business decisions and developing client relationships. This has a positive affect on all parties in and outside of the office.

Pierre Proulx, a senior Team Lead at RAI, commented on working with Shane saying, “I can’t remember the last relationship I had where I have benefited as much as I have with Shane.”

These mentoring rhythms have added to the growth of the culture at RAI and have become a subject of great importance for the firm. While the team grows, and the profits grow, Shane has helped lay the plans for moving into a new office space in the future. This space will be designed to accommodate the growing culture for the people RAI wants to invest in.

Thanks to the skill and experience that Shane provides as Managing Director, RAI has managed to step into the future and exemplify the way a modern architecture firm is managed.

Want a proposal for your next project?